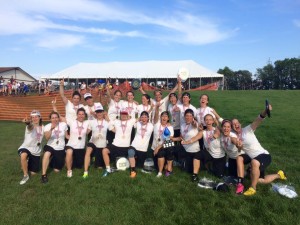 Last week, Vintage flew to Winnipeg to compete at the Canadian National Championships (CUC). With temps as high as 35 degrees plus humidity, we played five pool play games over two days (5-0 record). On the third day, we played semis (15-4) and finals against a strong Toronto team called Terra. After a hard-fought battle, we took gold 15-10 to win the championship and earned the right to compete as Team Canada for the 2016 World Ultimate Guts Championships in London, UK. We also won the spirit award in our division, as we did the last time we competed at CUC in 2013.

You can watch a replay of the final here.

Return to the news page >