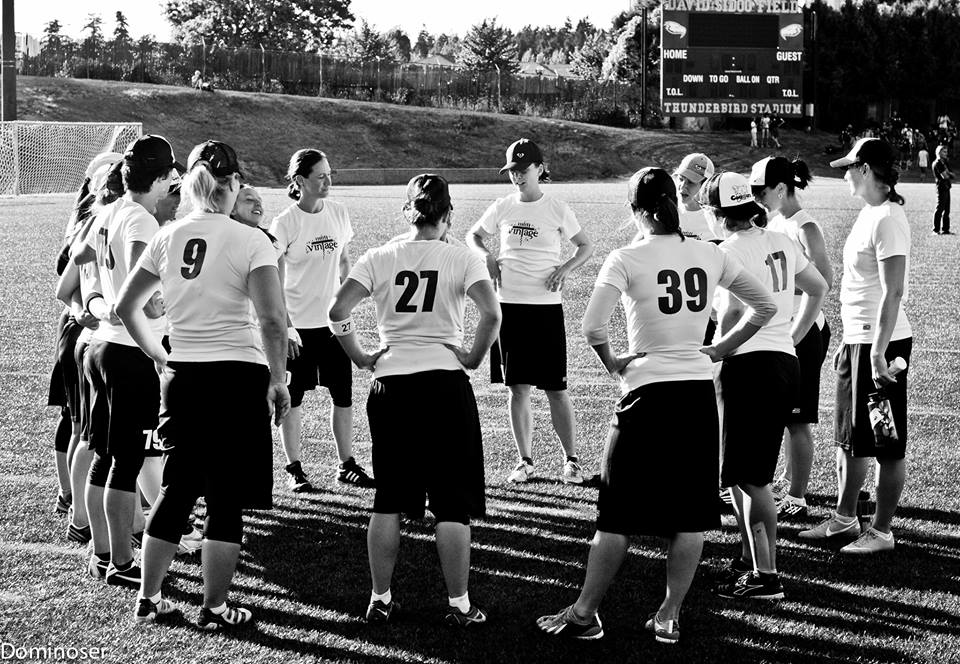 In 2011, a group of experienced players formed a team with the aim of participating in Montreal’s annual Jazz Fest tournament. Consisting primarily of players with young children or with other significant commitments, Vintage offered a way for a group of friends to continue to enjoy competitive ultimate in a more relaxed setting. However, our love of competition won out in the end, and we signed up to compete at regionals with the aim of securing a bid to the Canadian Ultimate Championships (CUC) in Ottawa.

With the mantra of “all talk, no practice” Vintage earned a spot at CUC and won the coveted spirit prize in the women’s division. In 2012, many players from Vintage returned to the competitive scene in Montreal and Vintage went on hiatus. Meanwhile, the World Ultimate & Guts Championships hosted a masters women’s division for the first time in 2012, and several former Vintage players helped Team Canada bring home the silver medal in that category.

In early 2013, Ultimate Canada announced that it would also have a masters women’s division for the first time at CUC in August. Vintage decided it would re-form for 2013 to compete in the new division. Although Vintage had to drop its “all talk, no practice” mantra, the sacrifice was worth it as the team won gold at CUC as well as the spirit award again.

As a result of the team’s first place finish, Vintage made the voyage to Italy in 2014 as the only team representing Canada in the first-ever women’s masters division at the World Ultimate Club Championships. Which we WON!

In 2015, we competed at the Canadian Ultimate Championships and won gold as well as the spirit prize for our division. As a result, we will be representing Canada at the World Ultimate & Guts Championships in 2016 in London, UK.